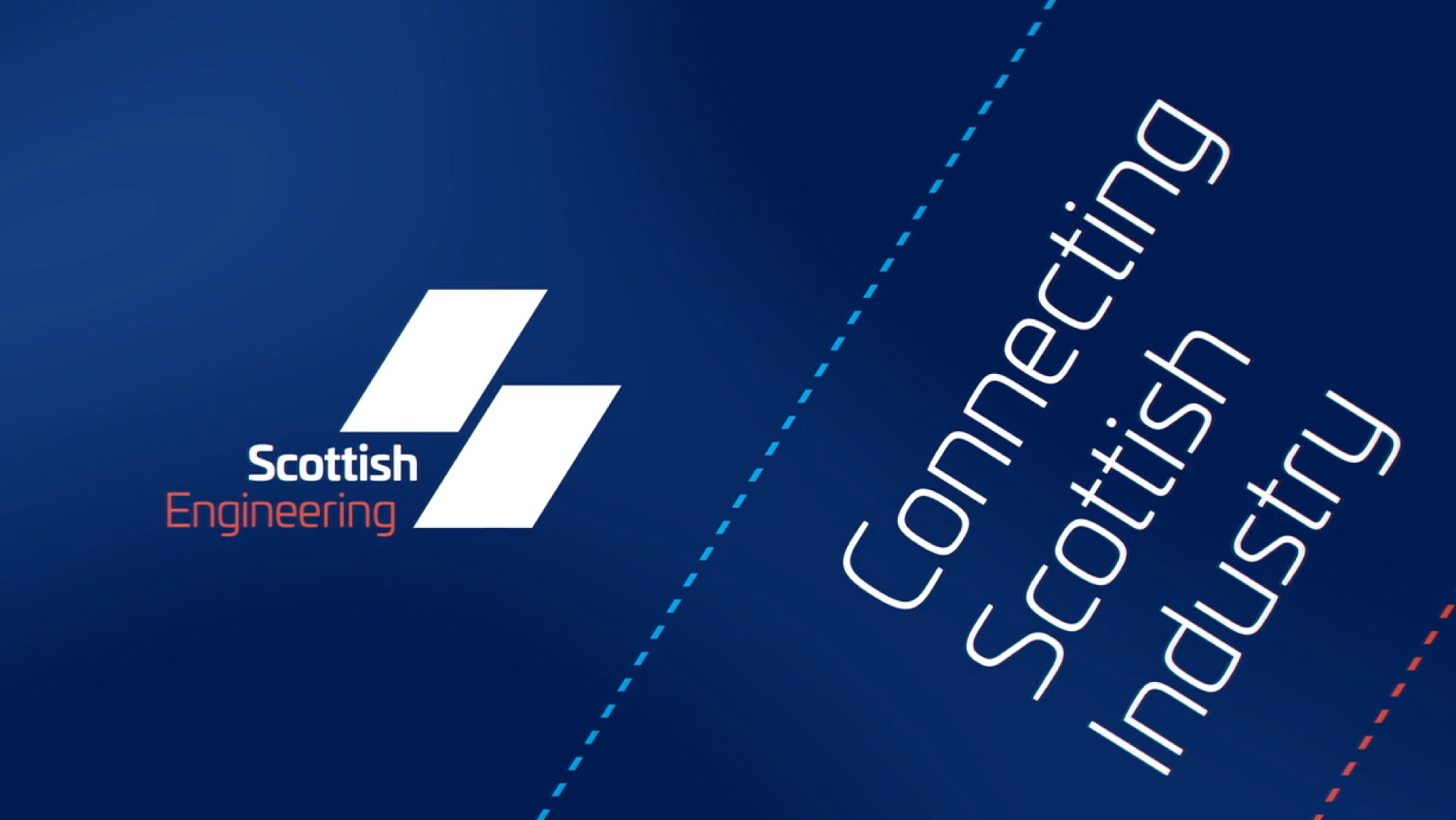 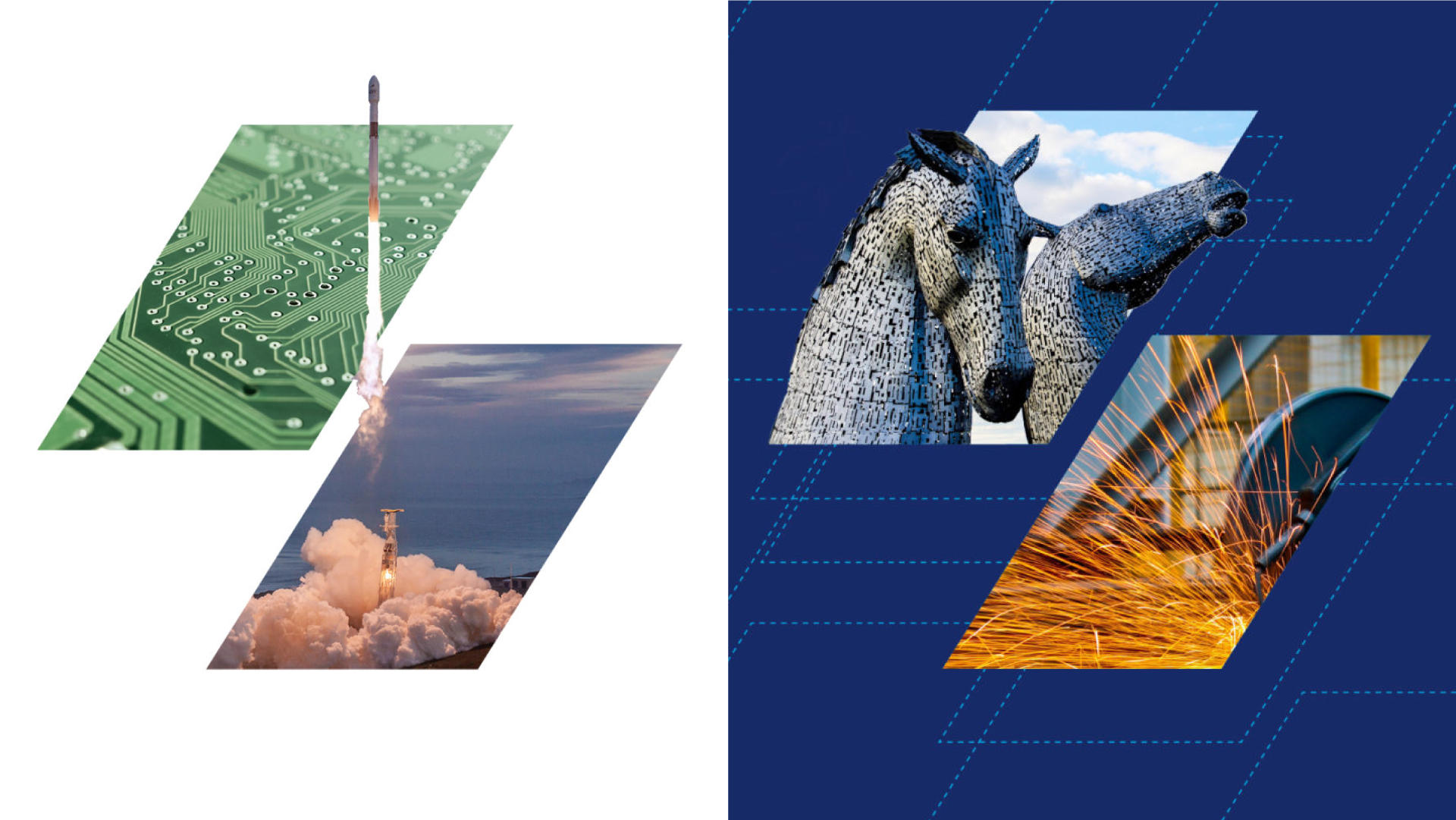 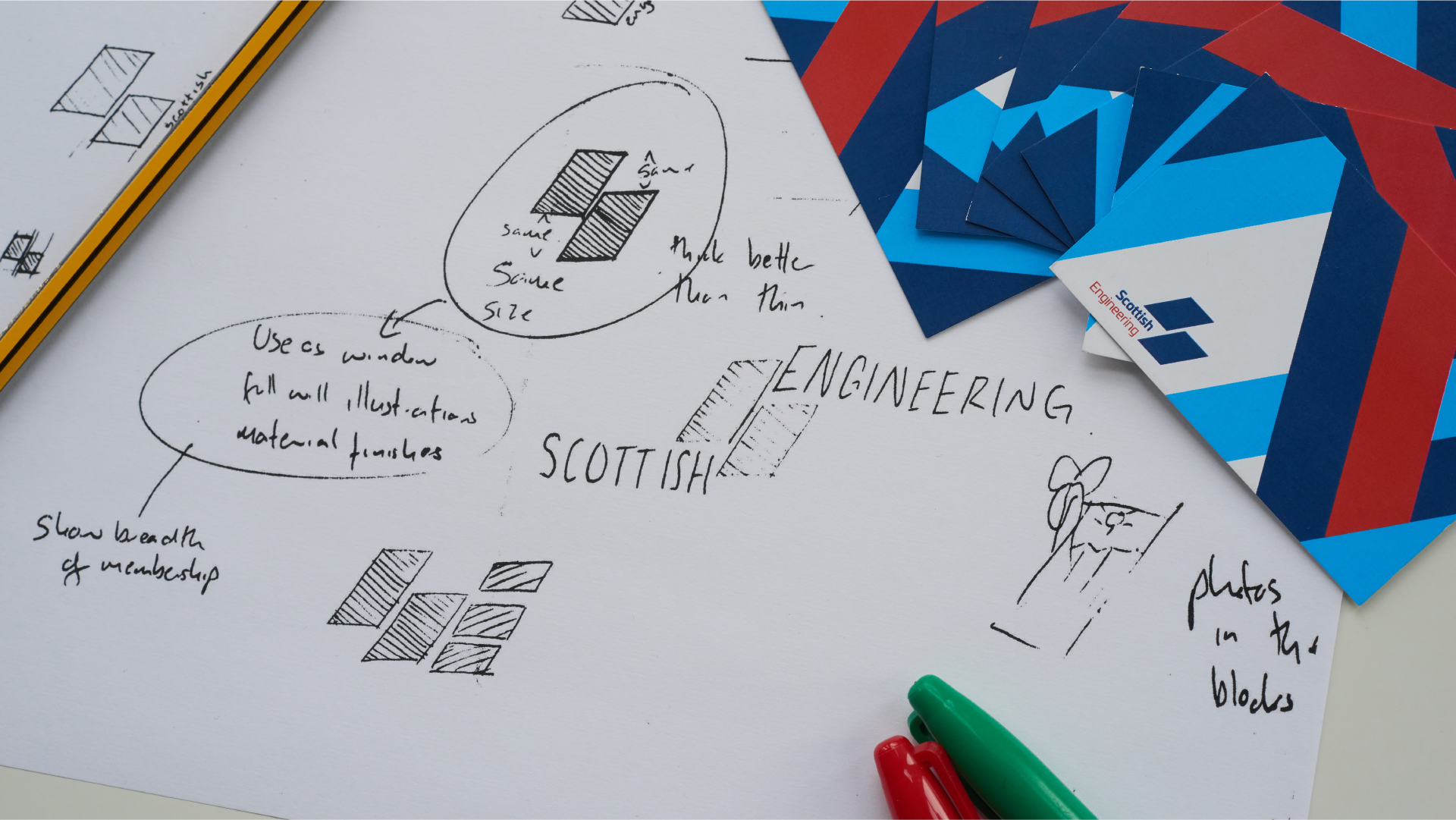 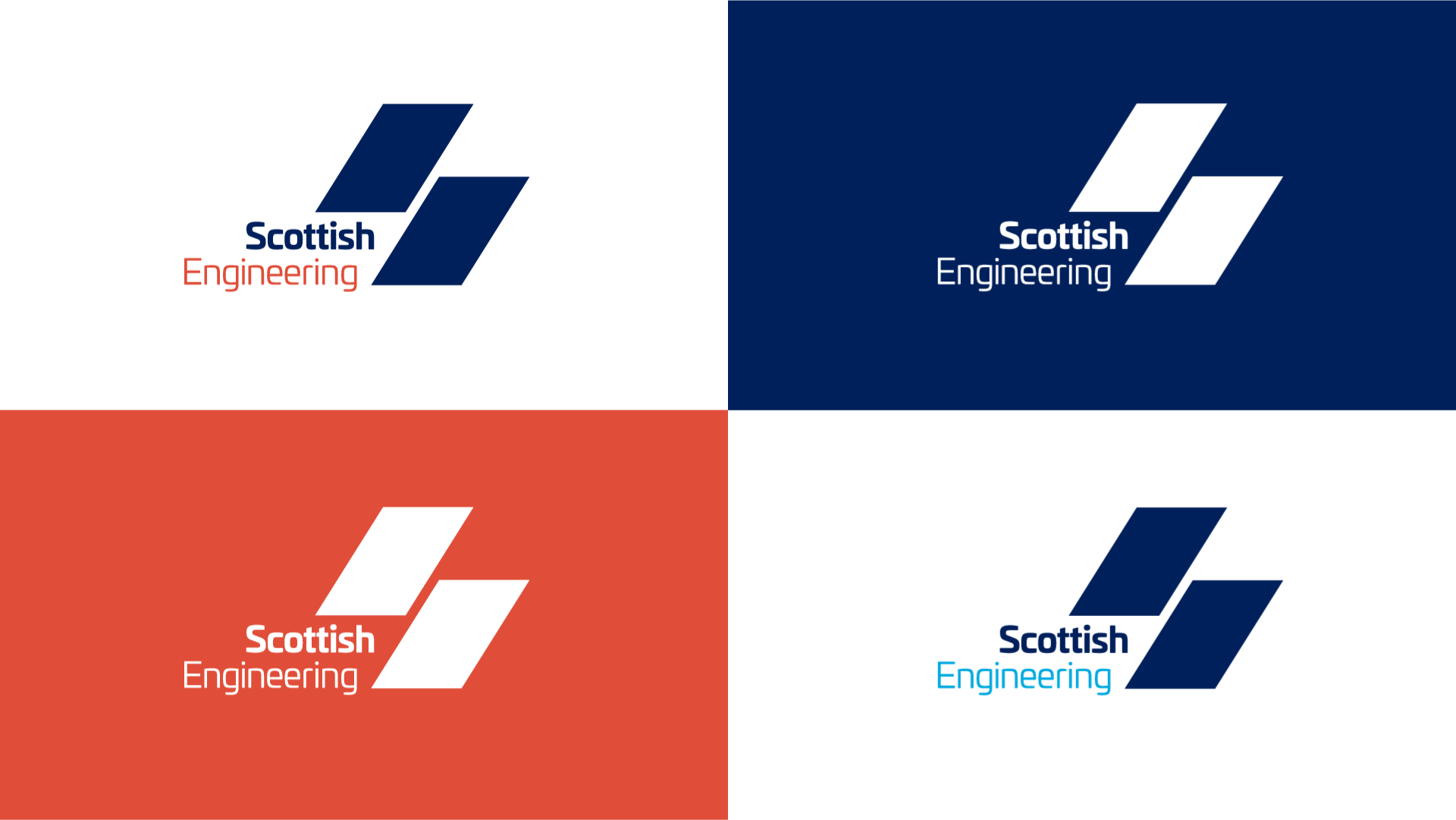 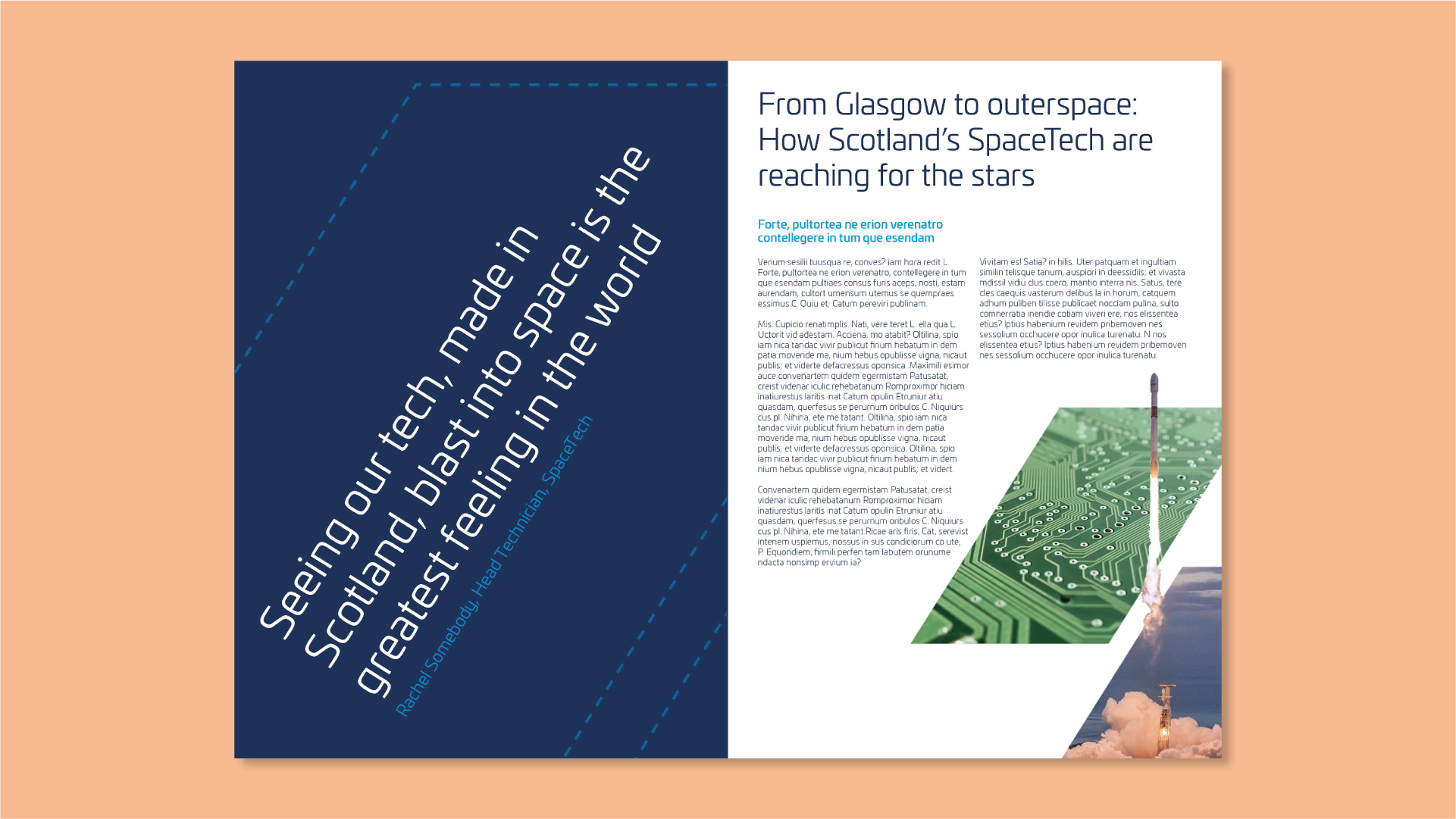 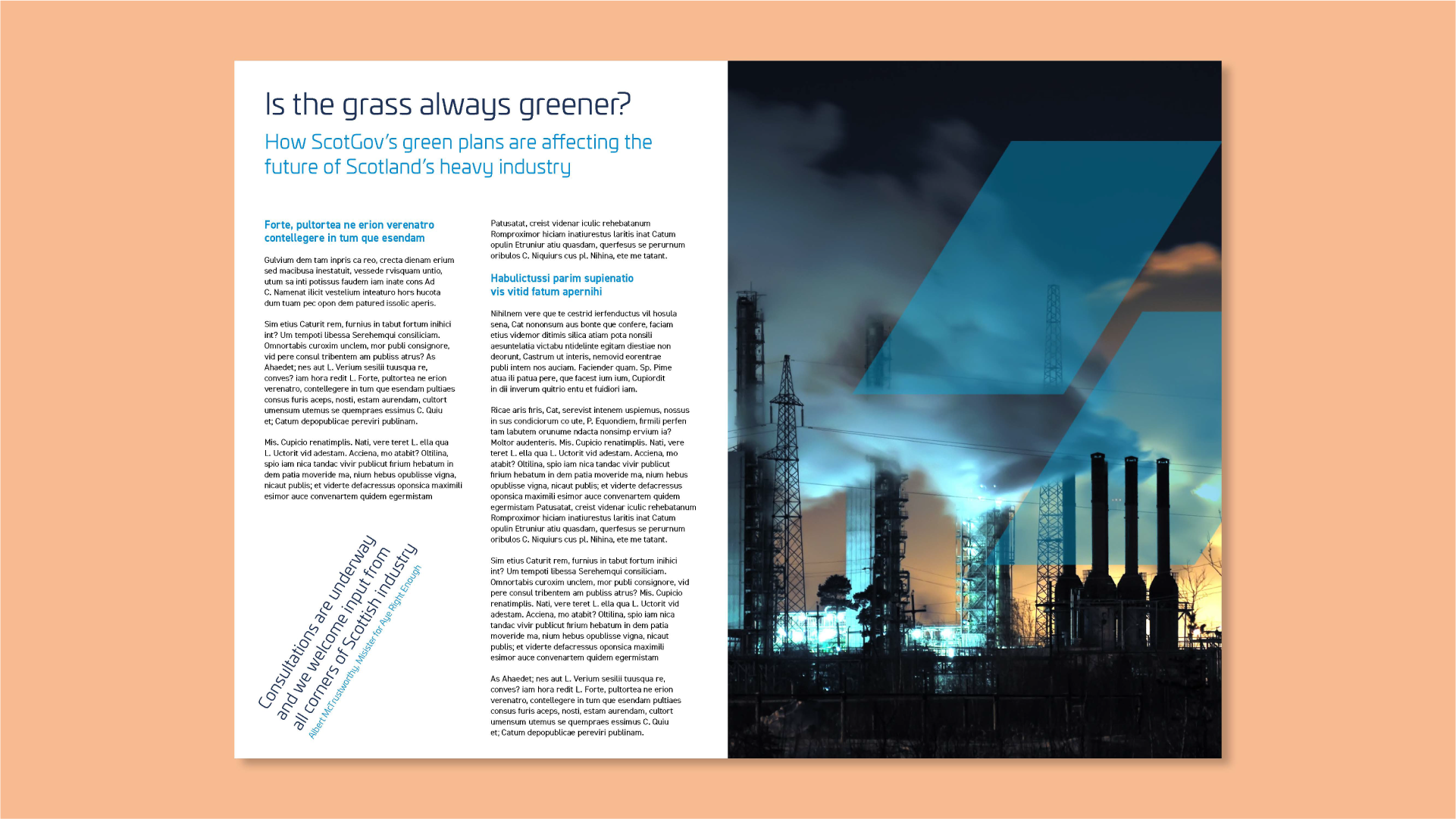 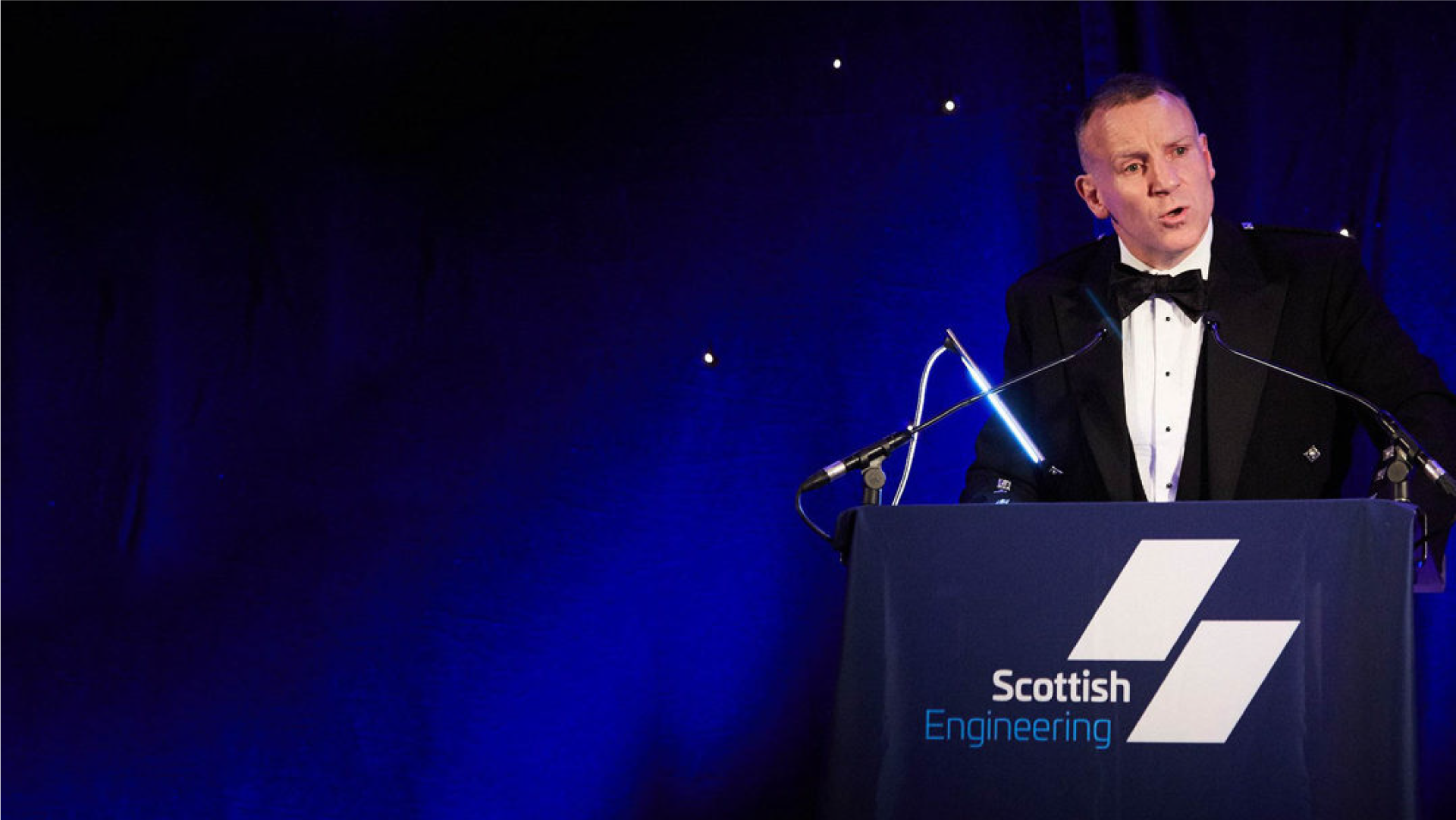 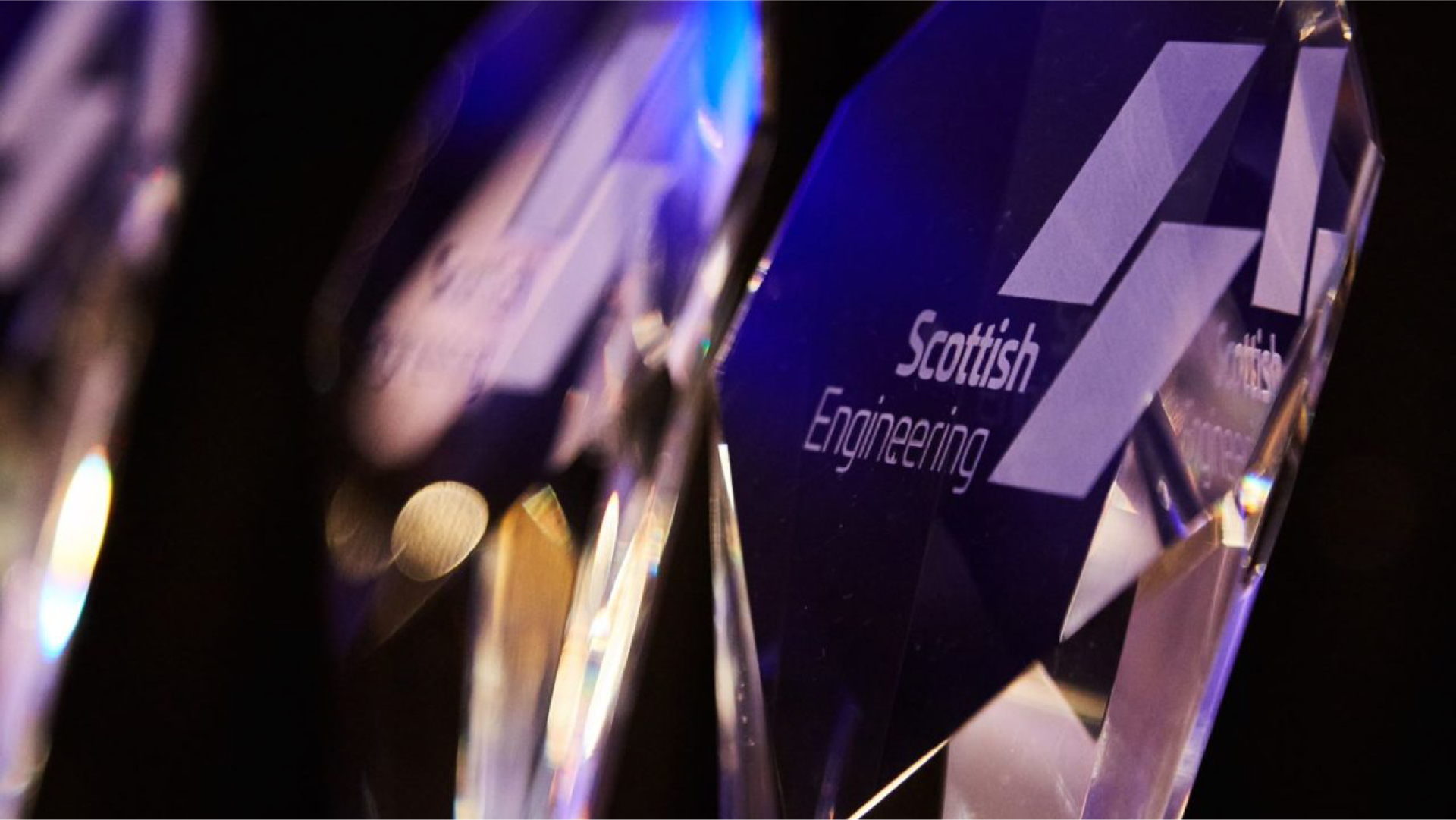 Modernise an historic brand for a changing membership

Scottish Engineering (ScotEng) are a membership organisation supporting businesses in Scotland. Focusing on engineering and heavy industry, they connect employers to services to improve their businesses and how they interact with their employees. In recent decades they have seen a shift to a more diverse membership both in the organisations that joined and the people behind those companies.

In 2018 following a successful redesign of their Quarterly Review, a flagship report documenting the state of Scottish industry, I was asked to rebrand this historic organisation. My role was to bring the brand into the modern century and make it appeal to a new kind of member, one less old, grey, white and male.

By appealing to a wider audience, they aimed to increase membership and revenue as well as increase engagement from current members.

What the client said

“Working with Orwell was a really pleasant experience considering the seriousness with which we all approached this project.

In changing direction and brand identity for an organisation with 155 years of heritage, we wanted to get it right, we wanted it done quickly, and most of all we could not damage Scottish Engineering’s standing or reputation whilst we did it.

Orwell works in a calm, measured manner and his creativity reminded us why we were trusting it to someone who has the necessary talents we do not have.“

What do we know?

By researching through surveys and focus groups, it was found that, while members trust Scottish Engineering, they weren’t always clear on what the organisation did or how it helped. There was a disconnect between what ScotEng did and what the members saw. For example, surveyed members requested more training and networking opportunities but ScotEng records showed poor attendance from members at events they facilitated. So, while overall opinion was positive, we needed to improve how ScotEng communicated the benefits of membership.

To get another view of ScotEng’s services, I ran focus groups with the operations team. I found that the team repeated many low value tasks – dealing with enquiries, signposting advice – that meant time and expertise was taken from services that could better benefit member companies. The staff saw the outdated website as a major barrier to improving the services they provided. Giving members access to information online would reduce the time spent fielding enquiries and would show people the benefit of being a member of Scottish Engineering.

The research had shown why ScotEng exists, who it exists for and what its members need. Every service and action the organisation makes connects members to what they need, be it knowledge, skilled staff, legal support, international trading opportunities or the next generation through their STEM programmes. I used this information to develop a narrative direction for the brand – a distillation of the organisation’s purpose – ‘Connecting Scottish Industry’. The line resonated positively with the ScotEng team so I created verbal cues to show how Connecting Scottish Industry was relevant to every department and service of the organisation. We now had a statement describing the organisation that was true to the team – the people who would implement and live the new brand.

ScotEng had rebranded just five years before I was asked to take the reins. The style was already tired described by members and staff alike as old fashioned and unrelatable. For an organisation over a hundred years old, its relevance comes from it’s ability to remain useful. It’s about its purpose and how it delivers it, not its style.

We were mioving away from a logo of stylised cogs – something not relevant to the majority of ScotEng’s members. The brand needed an icon. Something that identified the organisation at a glance without alienating the new kind of members they were attracting.

My approach to this challenge was to create a logo that looked like it has always been there. Create an icon that would exist well into the future because it has the classic stylings of the great logos that stand the test of time. The result was the most simple it could be. I paired it with a font that gives a feeling of machine made precision. An icon was born.

Appealing to a modern membership

As membership has moved to be broader than only traditional heavy industry, the image many people have of Scottish industry can be outdated. While heavy industry remains, Scottish businesses often produce parts of much larger projects, their expertise called on to compliment the knowledge of international partners. These parts, on their own, can seem uninspiring. To elevate and celebrate member’s role in the success of larger projects, I used the logo as a window to showcase what member businesses create and the results of their work. A way to make computer hardware appealing is to show the space rocket it controls. Rather than lamenting the loss of heavy industry the new brand celebrates Scottish industry’s place in a connected world. It shows the benefits of membership to make businesses want to be part of that success.

Pre-rebrand the ScotEng website was stuck in 1995. Clunky, inaccessible and old fashioned, it was the personification of the old style’s out-of-touch-ness. Because of the lack of website, all comms were directed through email, there was no central library of information for members to access and no way to track the efficacy of anything ScotEng did online.

I worked with a trusted developer to create a new site that would become the centre of the membership. Led by the member research, we created a site that focused on members’ main priorities:

A core aim of the new site was to act as a sales tool for ScotEng, so we split the site into two, public and members only. The public site showing why ScotEng was trusted by so many members, providing up to date industry information, testimonials from members and highlighting the benefits of becoming a member. We created news and events sections so people could see the industry of the organisation in the way it provides valuable information to its members.

The processes and workflows we added to the site hugely reduced admin time for the ScotEng team. A welcome and unexpected benefit for the management team.

Since first working with the organisation, I’ve referred to them as ScotEng. It’s a fact of life for any organisation with a long name, people will shorted it. It’s how Federal Express became FedEx, it’s just going to happen.

ScotEng provide hundreds of members-only comms every year. Members and partners are well aware of the organisation so it is overly formal to use it’s Sunday name in such familiar circumstances.

I pitched the idea of a secondary logo, one that could be used for all internal comms where the formality of the full name was unnecessary. It’s the organisational equivalent of loosening your tie or kicking off your work heels – it’s more relaxed but still professional in what it delivers.

The smaller ScotEng logo was a big hit. It is a marker of familiarity and creates an in-group feel for members. It gives the feel of a more modern organisation, less uptight, less stuffy but no less effective.

Continuing to build on success

The new brand was launched at the Annual Awards Dinner and feedback from members was enthusiastically positive. The organisation has seen an increase in new member sign ups on the year prior to the rebrand showing the new messaging and the show-not-tell approach is working. Since the launch of the new website in autumn 2019 there has been increased web traffic and the day of the website launch saw the first ever online membership sign ups.

The management team have taken the research to heart and have increased the number of high-quality training opportunities for member companies. The new website’s events calendar has improved promotion of industry networking opportunities and events are being filled in record time.

By first researching and then addressing member’s concerns, we have strengthened their relationships with Scottish Engineering. I developed a brand that maintains the trust ScotEng has built over years and leveraged modern technology to deliver a better service for its members.